Shandaken Clerk’s other identity is rooted in the past 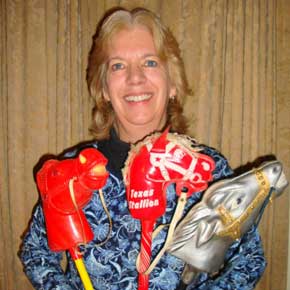 When people want to relive their childhood, they will pay almost anything,” says Joyce Grant, founder of TimeWarpToys.com, an online vintage toy store that she operates from Phoenicia, N.Y. “It is crazy sometimes.”

The February 1 online edition of the Wall Street Journal places the above quote in the second paragraph of an article on investing in vintage board games, acknowledging Shandaken town clerk Joyce Grant as an expert in the world of collectible toys.

Grant got her start in the business by selling off duplicate items from her collection of Batman and Beatles paraphernalia. She ran an antique shop at Phoenicia Plaza for eight years, and when the Internet hit in the mid-90s, a 12-year-old friend of the family made her a website, which she now maintains herself. TimeWarpToys.com gets 200 to 300 hits a day.

“Toy people are the greatest,” Grant remarked. “It’s not like selling jewelry or diamonds, where people want to scam you.” Nostalgia, as opposed to profit, is a powerful motivator. One customer wrote on the website’s feedback page: “Some of the toys I saw on your site made me cry, like the Flintstone Building Boulders. I remember sitting on our living room floor playing with them on Christmas Day all those years ago…Ah…to be that age again — no cares, no worries.”

Many buyers are thrilled to acquire toys they couldn’t have as a child, often because their parents couldn’t afford the purchase, or, as in Grant’s case, because her parents didn’t approve. She especially coveted the Great Garloo, a 1961 space monster robot in sandals and a leopard-skin loincloth. “My mother didn’t buy it for me because she thought it was too ugly for a girl,” Grant recalled. “I was a tomboy. I hated dolls and Barbies. I wanted to play with spy toys and cars. The neighbor kids had a Great Garloo, and now I’ve had 15 of them over the years.”

One baby boomer observed in the website comments, “Who woulda ever thought that a girl would have remembered so many cool things? Thanks for the memories!”

Younger customers buy vintage toys for their boomer parents, while older people are eager to show their grandchildren the toys they once played with. “My grandkids get to play with any toy I have, no matter how much it costs,” said Grant. “It takes them a while to realize, when they’re little, that I’m going to sell the toys eventually.” But as she points out to dismayed youngsters, there will always be new purchases passing through.

Grant and her husband, Brian, travel to auctions, flea markets, and estate sales to buy toys. “That’s our entertainment,” she said. “Especially when you get a good bargain at an auction, and it’s a rare item, and you know what it is and no one else does. The bidders used to be all men, so when a woman bids, I also get attention.”

Prices on the website are as low as $18 for a pair of 50s metal ice skates or $20 for a Dr. Smurf from the 70s. Board games tend to command higher prices, such as Ice Cube, a Milton Bradley game that uses real ice cubes as playing pieces, listed at $325. Mechanical toys in working condition are highly sought after, such as a 1966 Rock ‘Em Sock ‘Em robot toy, which Grant sold for $300, partly because it was in its original box, always an added value.

Grant is writing a book on the inventions of Marvin Glass, creator of the two-figure battling Rock ‘Em Sock ‘Em robots. He also invented Mouse Trap, a game that requires constructing a Rube-Goldberg-like contraption, and many other classic toys. Grant’s book on collectibles from the 1964-1965 New York World’s Fair (Schiffer Publishing, 1999) is a 600-page price guide that sells for $29.95.

What about her own favorite toys? “I love the 60s slot car race sets. I know how to take the cars apart, switch out motors and tires, deal with bushings and magnets,” Grant reported. A six-foot-tall Batman cutout presides over her home office, and on her desk stands a troll given to her by her grandmother. At the town hall, she keeps only one toy — a 1930s “mixed nuts” can. Open the can for a snack, and a springing snake pops out. “If we get someone new working there,” explains Grant, “I break ‘em in to see if they’re going to be a fun person. Other than that, I keep the toy world separated from the town clerk world.”++

Tags: Great Garloo, Joyce Grant, Time Warp Toys
Only a fraction of the material published in each week's Woodstock Times makes it to our website. To read our full coverage of local government, schools, people of interest, arts and entertainment, classifieds and the region’s best calendar, subscribe today for just $35 a year.